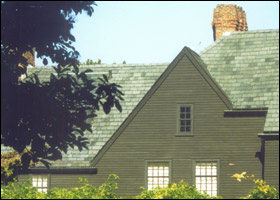 The most famous voyage into Salem harbor is that of Nathaniel Bowditch, commanding a three-master homeward bound from Sumatra. Crossing the rock-strewn waters of Salem Sound, even in clear weather, should inspire appreciation for the navigators of Bowditch's era.

Nathaniel Hawthorne, a native of Salem, spent the years 1846 – 1849 running its Custom-House, and ruminating on his ties to the city – his thoughts became the preface to The Scarlet Letter. The moment neatly illustrates primary currents of Salem’s development that are still felt today.

First is the witches. Hawthorne’s great-great-grandfather was a judge in the infamous trials of 1692, and the legacy of his ancestors weighed on Hawthorne. He wrote “I. . . hereby take shame upon myself for their sakes, and pray that any curse incurred by them. . . may be now and henceforth removed.” Little shame (and perhaps some form of curse?) is evidenced in the relentless exploitation of a 17th century hysteria by today’s “witch city.”

Second is trade. Hawthorne’s ancestors were merchants and mariners; his father died at sea. For a brief period in the early years of the Republic, Salem rivaled Boston for pre-eminence in trade with the East. The piled-up wealth built handsome neighborhoods, and later factories.

Finally, Hawthorne looks at Salem’s past with an informed nostalgia. The Derby Wharf he sees “is now burdened with decayed wooden warehouses and exhibits few or no symptoms of commercial life. . .” The book he is writing exhumes Puritan culture. {NH/SL}

In contemporary Salem, the witches may be wiccans or pagans, and the trade is in tourism, but the city is still pretty good at informed nostalgia.

The most famous voyage into Salem harbor is that of Nathaniel Bowditch, commanding a three-master homeward bound from Sumatra, in the year after he published his landmark New American Practical Navigator:

. . .the Putnam approached Salem harbor on December 25, 1803, during a thick fog without having had a celestial observation since noon on the 24th. Relying upon his dead reckoning, Bowditch. . . had the good fortune to get a momentary glimpse of Eastern Point, Cape Ann, enough to confirm his position. The Putnam proceeded in. . . and anchored safely at 1900 that evening. Word of the daring feat, performed when other masters were hove-to outside the harbor. . . added greatly to Bowditch’s reputation. {APN p.iv}

Crossing the rock-strewn waters of Salem Sound, even in clear weather, should inspire appreciation for the navigators of Bowditch’s era. Today the ledges are well marked, but the profusion of buoys requires constant reference to the chart. It’s not well-suited to casual exploration in thick weather or after dark.

The main channel into Salem runs north of Middle Ground, where it’s dredged and marked with lighted buoys for the large vessels serving the power plant. The South Channel, between Marblehead and the Coney Island group, requires finding a number of unlit buoys and daymarks, but it carries depths of at least 15 feet.

Salem is open to the northeast, with a two mile fetch to the Beverly shore. You may find a place to anchor far enough in to feel protected, and clear of the moorings, although the shallows around the perimeter extend well away from shore. Obviously, no anchored boat can impinge on the dredged ship channel.

Hundreds of moorings fill the deep water in the middle of Salem harbor. For transient moorings including launch service, contact Salem Water Taxi, now based at the public landing, behind Pickering Wharf on Congress St. Or call Hawthorne Cove Marina.

In most summer weather, Salem’s moorings are comfortably sheltered. In a true northeast gale, though, the harbor is something crazy. Gloucester, or Boston, are much saner alternatives to a Salem mooring when an ocean storm is in the forecast.

Hawthorne Cove is a full service marina with slips for transients, just beyond the power plant as you enter the harbor. Shoreside, it’s in an attractive, old, densely-built waterfront neighborhood within easy walking distance of downtown.

Exposure to the east means it’s a poor choice in a real coastal storm; otherwise it’s comfortable. The entrance channel looks implausible on the chart, but it’s straight, plenty wide and well marked with private (uncharted) buoys. Avoid cutting into the channel early. Stay among the big sailboats in the mooring field until you’re sure you’ve spotted all the channel buoys and then follow them carefully. The marina basin and channel are dredged, and have silted in over the last few years. We saw controlling depths of about 6 feet at MLLW both in the channel and in the outermost slips {2007}. The bottom is soft, though, and we settled imperceptibly into the mud on a -9 inch tide, then left when the tide came up a foot.

Pickering Wharf Marina surrounds the retail/restaurant complex on Pickering Wharf. Tucked in behind Derby Wharf (with an inactive lighthouse on the end) this is as completely protected as any marina in the region. It’s close to the commercial heart of downtown, and right next to the National Park’s group of historic buildings at the head of Derby Wharf. The marina reports 7 ft at low.

When approaching Pickering Wharf, it’s worth finding the daymark R “2” (usually obscured by moored boats) and passing it close aboard, then making a gradual turn for R “4”. A straight line from red “2” to red “4” will take you over the projecting 4 foot shoal before reaching the channel. And don’t get turned around by the location of G “5”, so far from shore. We know of one boat leaving Pickering Wharf who cut between the daymark and the mainland a little after high tide and spent an unplanned and very unpleasant extra day in Salem.

Friendship is a modern interpretation of a late 18th century East Indiaman that traded out of Salem during the city’s commercial zenith before the War of 1812. She’s usually moored on the inside of Derby Wharf.

Not for navigation. Charts are not updated.

Economic necessity has forced Salem, like all of coastal Massachusetts, to innovate continuously. And the city has responded with an impressive string of achievements, including a talent for interpreting itself to visitors. Maybe the city is so good at incorporating its past into its present because it’s been at it so long.

As early as 1799, shipmasters engaged in trade with the Pacific formed the East India Marine Society; among the Society’s projects was to collect and display artifacts from the lands they visited. The Society has evolved (splendidly) into the Peabody Essex Museum. Nathaniel Bowditch, the founding father of American navigation, was an early president of the Society, and is himself now the subject of a PEM exhibit.

Throughout the 19th century, Salem residents created a number of milestones that go largely uncommemorated in town. Naumkeag Cotton Mill (established 1848, across from Pickering Wharf) invested maritime wealth into one of the country’s earliest (first?) steam-powered textile mills. The writings of Hawthorne are well known, but his footprint in town is small.

Alexander Graham Bell was a Salem resident, when in 1876 he received US Patent #174465 for the invention of the telephone. A plaque outside the Lyceum describes “the first long distance call” from Salem to Boston made later that year. Parker Brothers got its start here in 1883, and introduced its blockbuster Monopoly, manufactured in Salem, during the Great Depression. Their plants were bulldozed in the 1990s.

I’m guessing that Salem took a decisive step towards its modern configuration in 1938, when the National Park Service came to town. That year, key pieces of the waterfront became the nation’s first National Historic Site, and Salem was officially in the business of tourism.

Ten years later, the 17th century home of a witch-trial judged opened as a city-owned museum, and Salem added witches to its business plan. Nowadays, witch-themed attractions run from the quirky paraphernalia shops, to the kitschy dungeons and waxworks, to the inexcusable Elizabeth Montgomery “Bewitched” statue.

What does this all mean for the visiting sailor? Salem has managed pretty effectively to blend an economy that leans on tourism with the day-to-day workings of a real town. There’s a healthy smorgasbord of attractions, dozens of basic coffee shops, sandwich or pizza spots, plus more top-rated restaurants than any town on the north shore, alongside all the practicalities. And since much of the modern downtown has grown within the perimeter of the old seaport, it’s an easy walk from the harbor.

The House of Seven Gables.

Salem abounds with exemplary houses in the Adam (“Federal”) style that was fashionable in the years of her great prosperity.

A walk from the harbor up through the historic district, including Essex, Federal and Chestnut streets, passes simple wood-framed houses and shops, larger residences of shipmasters and merchants, and some truly impressive brick mansions, spanning nearly 200 years of prosperity in Salem.

For a more focused time close to the harbor, you can tour the “House of Seven Gables” or the Custom-House by Derby Wharf.

Off the Beaten Path

Winter Island is a city park at the mouth of the harbor. In the early years of settlement it was used for drying fish and in 1799 the frigate Essex was launched from its shores. Today there are picnic areas, remnants of old forts and a disused Coast Guard Air Station.

The Peaboby Essex Museum states flatly that it’s collection of maritime art and history “is the finest in America.” However fruitless it may be to adjudicate among the nation’s elite collections, you won’t find one that’s clearly better. Like the hajj, a visit here is something to which every devout sailor aspires.

For an online taste, their Roux Sketchbooks offer a glimpse of the collection’s richness, along with a really nice piece of web design, circa 2005.

With art, architecture, history, movies, pubs, shops and restaurants, Salem has a weeks worth of unique attractions. It’s an ideal place to wait out bad weather.

The Water Taxi and Hawthorne Cove provide launch service for their mooring customers.

Both marinas have showers, restrooms and trash facilities.

The National Park Service has an orientation building at the head of Derby Wharf.

There is no diesel available in Salem. The closest sources are Marblehead to the south or Beverly to the north.

Water and ice are available at the marinas. Most imaginable supplies and conveniences of civilization are within walking distance of the harbor. Salem’s downtown is vital and compact.

For repairs, Hawthorne Cove has a full service department. Dion’s, at the south end of the harbor, is purely a repair yard, in business since 1914. They have limited transient facilities for repair customers.

Hawthorne Cove has pumpout capability, and the city runs a pumpout boat, “Salem Pumpout” on VHF 09.

If you have updated information, corrections, or contributions to this harbor, please share them below. Comments are moderated by Boston Sailing Center. 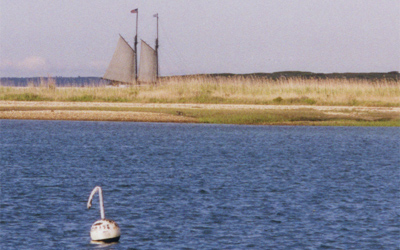 Visiting Cuttyhunk presents the classic paradox of travel to all remote and uncommercial places: how to appreciate them without undermining the very qualities you came to admire. 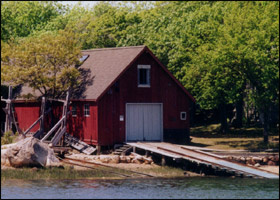 This perfect little gem of a harbor sits near the Buzzards Bay entrance to Woods Hole – at the nautical crossroads of southern New England. 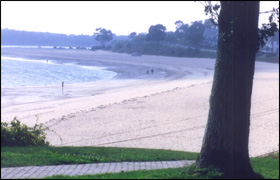 The channel into Onset doesn’t feel as tight as the chart suggests, though, and at the end is a quiet, Victorian-inflected seaside resort. 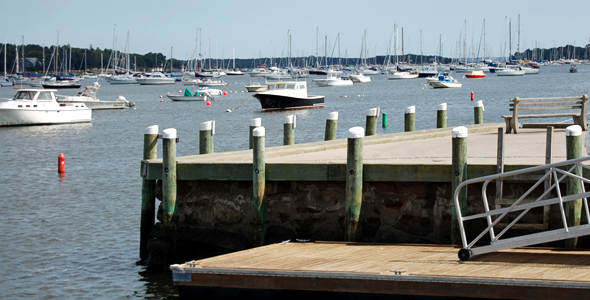